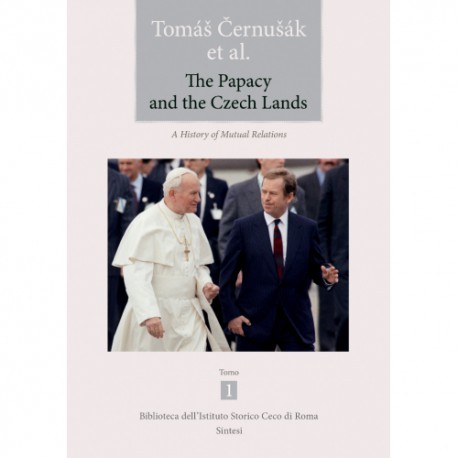 The Papacy and the Czech Lands. A history of mutual relations, Tomáš ČERNUŠÁK et al.

The papacy can be viewed from many different aspects, and each one of them contains something fascinating and surprising for the modern man. For Catholics the papacy is associated primarily with the person of the Bishop of Rome as the direct successor to the apostle St. Peter. Most people associate the papacy with the Vatican, the smallest state in the world, with its remarkable museums and art collections or a unique institution with an almost two-thousand-year historical tradition linking the world of the ancient Roman empire with the internet age in a remarkable manner. But the papacy also represents an important historical phenomenon. as such it has had its own, specific history with light and dark sides. But naturally as a political and religious institution with universal focus it is also intensely present in the history of other countries with which it has come into contact over the centuries. Pope Leo XIII’s decision to open the secret Vatican archive to the professional community in 1881 was a fundamental step allowing research into both the history of the papacy and the historical circumstances of its relations with various countries. The wealth of sources that it contains gradually led to the foundation of many historical institutes of the individual states in Rome which to this day engage in specific publication work or research into different questions of history in the context of the papacy. The Czech Lands also play a part in these activities. Since the end of the 1880s the promising beginnings of Czech research into documents of papal provenance have been associated with the socalled Czech expedition, which operated in the austrian historical Institute in Rome, and primarily with the independent Czechoslovak historical Institute in Rome, founded in 1923. But history granted it a short existence. The period of the nazi and communist totalitarian regimes led not only to the institute’s closure, but also the breaking of contacts with the international scientific environment and the drastic termination of broadly conceived projects. The by now Czech historical Institute in Rome (so-called as a result of the breakup of Czechoslovakia) could follow on from the activity of the pre-war institute only in 1993. This book represents an attempt to use the existing old and completely new results of historical research applied to questions of the mutual relations between the papacy and the Czech Lands from their very beginnings in the early Middle ages up to very recent history. during its writing, we as authors had to deal with several fundamental methodical and formal problems. The first of them was the intention to write a publication accessible to the general public but which also retained an expert character. another no less important problem was the terminological definition of both of the examined entities. We viewed the papacy as an institution with a universal religious or political scope or at least a tendency towards it, the principle of which is mainly the person of the pope himself. over the period under study the scope of his influence as the head of the Catholic Church underwent extensive changes, as did the history and competencies of all the institutions associated with its activities. The counterpart under consideration – the Czech Lands – represents a small central european state, or grouping of historical countries, having variable constitutional arrangements during different eras. With regard to their territorial definition, the authors conceived this primarily as the current territory of the Czech Republic, naturally with appropriate consideration given to the development of those neighbouring lands with which connections of varying intensity linked us in the past. This was essential primarily during those periods when the Czech Lands were a part of a larger state whole (for example, austro-hungary or Czechoslovakia), and the relations of the papacy to them corresponded to this. out of the history of both wholes it was necessary to select just that which could illustrate a certain developmental line and share of one and the other whole out of it. each chapter of this book has its focus elsewhere – either in the papacy itself or in some aspect of its development or in an abrupt historical shift of the country which is the second side of the interest. We have primarily attempted to apprehend the main tendencies in the papacy’s history. In the case of the Czech Lands we have attempted to follow in particular those concrete events directly associated with the participation of the papacy or which were caused by papal interventions, and it also involved the forms and ways by which the influence of the papacy spread to the europe and the Czech Lands, and finally the ways in which the Czech Lands and their inhabitants reacted to the demands coming from the part of the papacy. In the details of data relating to names we attempted to cover at least some of the people from Bohemia, Moravia and Silesia who contributed to events directly at the heart of the papacy or the events which it caused. With the exception of the first chapter about historiography and the last chapter about relations in the 20th century, we have attempted to convert the names into their english equivalents if the given form allowed it. The research into documents in Vatican and Italian archives covering relations between the papacy and the Czech Lands is far from complete, and some periods have so far only been covered in a fragmentary fashion. We as authors are well aware of this fact. The purpose of this book is not to say the final word on the given matter, but to present a certain initial synthesis of the matter with the use of those results which Czech and foreign historical science currently has available.