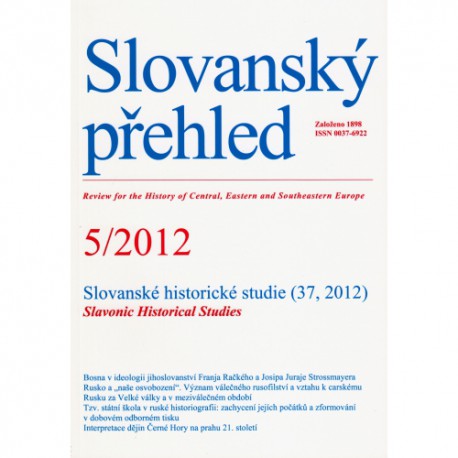 Bosnia figured in all Croatian national-political conceptions of the 19th century as an important part of Croatian or a wider South Slavonic historical, political and national territory. This paper examines the position of this land in the original ideology of Yugoslavism formulated by Franjo Rački and Josip Juraj Strossmayer at the beginning of the 1860s. This ideological system greatly influenced and contributed to Croatian national integration in the second half of the 19th century. The paper consists of a general description of Yugoslavism, which has yet to be done in such scope and form in the Czech language, and a detailed analysis of the status and role of Bosnia and Bosnians within this Croatian national integration ideology and in the political thinking of its creators. The main sources used include political treatises, brochures, newspaper articles, speeches and correspondence.

Alexandr BRUMMER
Rusko a „naše osvobození“. Význam válečného rusofilství a vztahu k carskému Rusku za Velké války a v meziválečném období
[Russia and "Our Liberation": The Meaning of Wartime Russophilia and the Relationship with Tsarist Russia During the Great War and the Interwar Period]
s. 465–536

The study is devoted to relations with Russia and Russophilia as a traditional component of Czech nationalist thinking. It summarizes the development of Czech sympathy for the Great War at home, in exile propaganda and among Russian Czechs and later legions. The analysis of the interwar disputes primarily between Masaryk and Edvard Beneš on the one hand, and Kramář on the other hand, concerning relations with the Russian Empire, wartime Russophilia and the problem of their image in interwar Czechoslovakia, which refers to the issue of the political legitimacy of the struggle between the Castle and the right and the existence of two parallel discourses, that of the Castle and that of the right, based on different premises and promoting a different view of the meaning and purpose of the nation-state.

The paper offers a detailed analysis of the foundation of the “state school” in the second half of the 1840s in the works of Kavelin and Solovyov and follows its development up to the 1860s, when the formation of the school rounded off with the works of Chicherin. The established facts are then confronted with rendering of the activities of the school in the contemporary press and historiography, in order to demonstrate which historiographical conceptions were justified. The article presents the conception of the “state school” in the works of M. P. Pogodin, V. G. Belinsky, N. G. Chernyshevsky, I. Y. Zabelina and particularly in the works of N. K. Bestuzhev-Ryumin and P. N. Milyukov.

František ŠÍSTEK
Interpretace dějin Černé Hory na prahu 21. Století
[Interpretation of the History of Montenegro at the Threshold of the 21st Century]
s. 575–621

The paper focuses on different interpretations of Montenegrin history after 2000. It is primarily dedicated to the new surveys of this country´s history published in the first decade of the 21st century, mostly in close connection to the post-Yugoslav process of nation-building which culminated in 2006 by the declaration of independence. Critical comparative analysis of works by Thomas Fleming, Živko Andrijašević, Šerbo Rastoder, Elizabeth Roberts and Kenneth Morrison is conducted in a wider context of recent historiographical production on different periods of the history of Montenegro, Yugoslavia and the Balkans.